We are going to present how to use Apache JMeter (open source load testing tool) in order to perform basic load and stress testing on your web application. We are going through each step and show how to use JMeter’s GUI (graphical user interface) in order to build a test plan, configure load tests, run test and inspect the results.

Apache JMeter is an open source Java application, so it can run on any OS (operating system) which supports JAVA 6 or later. JMeter is a load testing (performance testing) tool designed to run tests on any given URI endpoint, with configurable number of concurrent clients (users) and other useful test configurable metrics and inspect results. Test results can be viewed in charts, tables or can be exported in CSV or XML formats.

In order to start using JMeter you need a machine that you can install and run JMeter on. By default JMeter runs as a GUI application, which requires more resources than a command line based application. In order to perform the load tests faster and without bottlenecks you can run JMeter in the non-graphical mode (details on how to start JMeter in non-graphical mode in the next post)
Please note that results can differ based on the web server where the web application is hosted. Factors that we need to take into account are:

Apache JMeter is very easy to install. Depending on the OS, there are different ways on how to do this.

In order to run JMeter, here is what you need to install:

To start JMeter on Windows OS you need to go to the folder where you unarchived JMeter binaries and just run $JMETER_HOME/bin/jmeter.bat batch file. Please see here how you can run JMeter on Mac.

So, once all is installed and JMeter is running you can start creating your first load test. For this demo we are going to use Apache JMeter 2.11 on Mac.

In order to create a load test, add a Thread Group, in order to configure the thread properties (load test configuration):

Start by adding a Thread Group to your Test Plan by following the below steps: 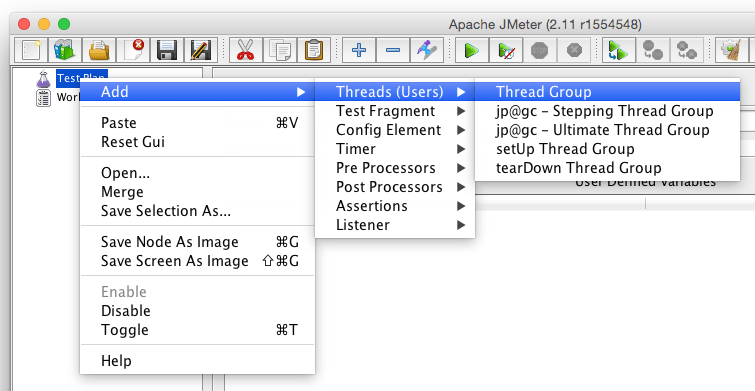 Configure the following properties which will be used to run your load test: 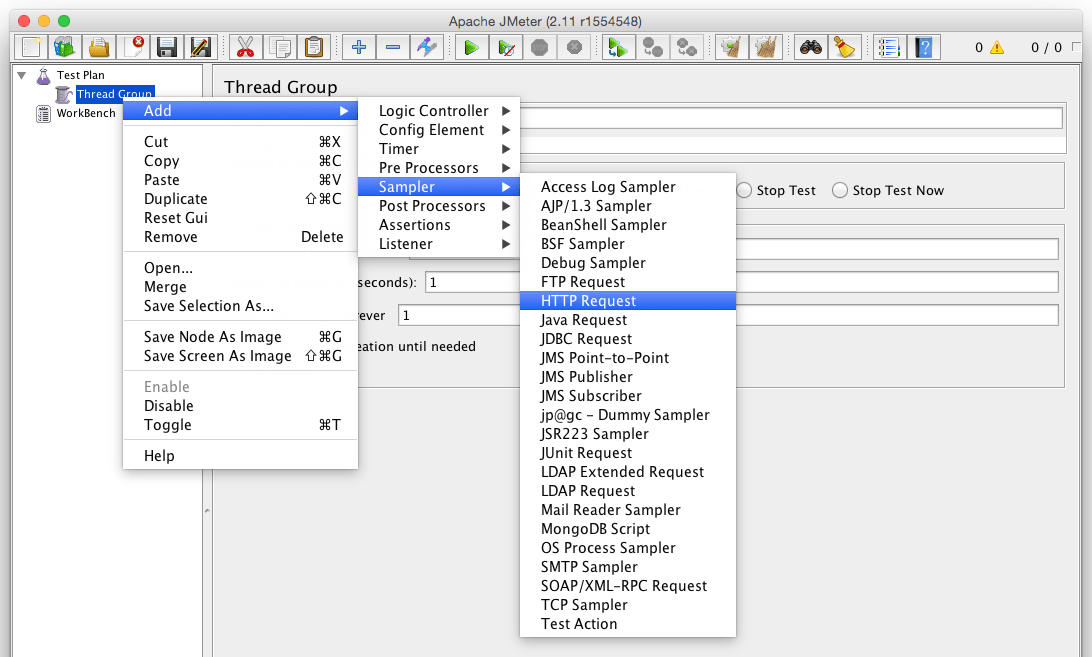 In the HTTP Request Sampler, under Web server, set the URL in the Server Name or IP field (website URL i.e www.example.com or public IP address).

Check here how to use a CSV Data Set in your JMeter test.

Note: In our JMeter test we will continue to use only one HTTP Request Sampler.

If your web application uses Cookies, JMeter allows to add cookies which will be sent with each HTTP request. You can do that simply by adding the HTTP Cookie Manager by following these steps:

In case you need to send specific headers with every request, JMeter allows to add headers by adding the HTTP Header Manager by following these steps:

You need to use JMeter’s Listeners in order to view the output of a load or stress test. One of the most used Listeners is the View Results in Table, which we’ll use in the post and here is how to add it to your Test Plan: 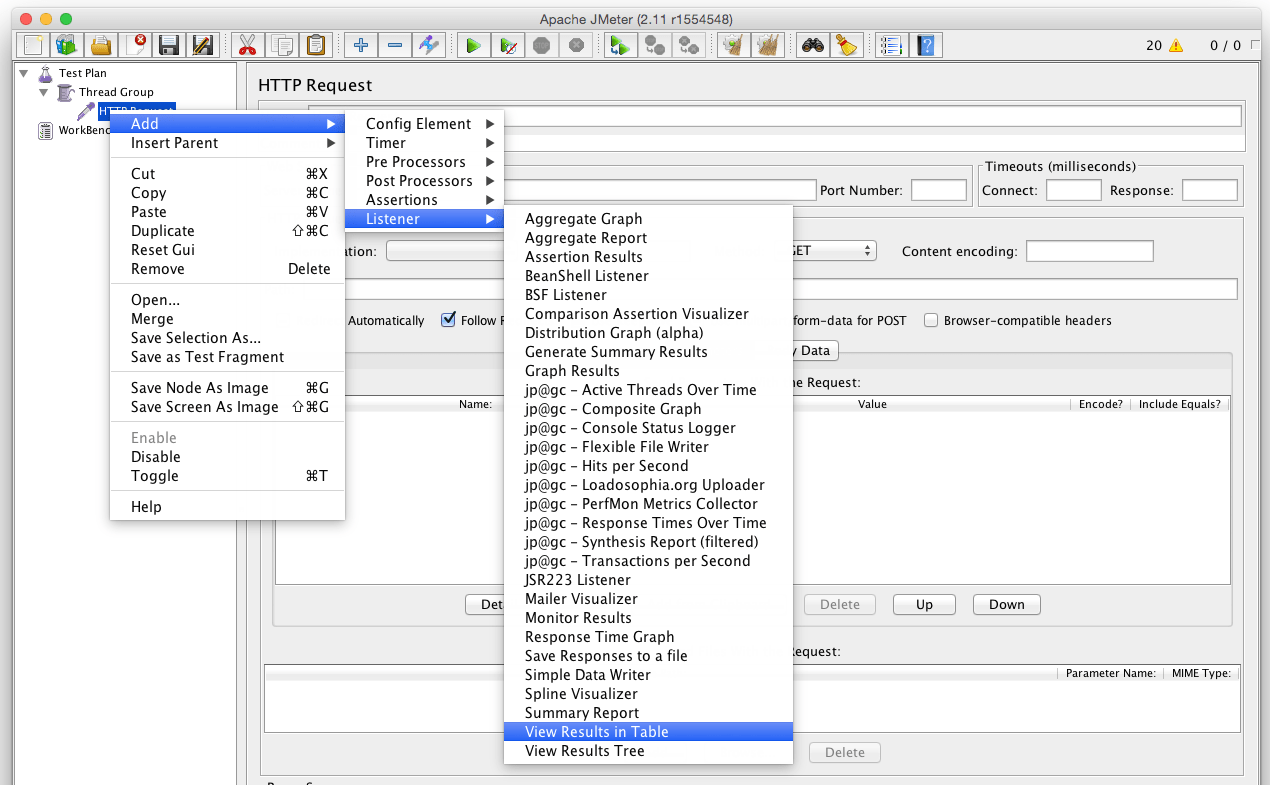 After installing everything needed in order to start Apache JMeter and after configuring the Test Plan, you can start running your test.

First, save the test plan with the .jmx extension.
Run the test by pressing the green arrow button in the toolbar or by pressing Cmd/Control + R keys.

You’ll starting seeing results in the View Results in Table, important columns are Sample Time (ms), Status, Bytes and Latency. To understand better the errors and responses you can check out this post.

At the bottom of the View Results in Table, you can see the Average Sample Time in ms and the Standard Deviation.
According to the results, after running 100 samples the Average Sample Time in milliseconds was 133 ms. Latency is going to be affected by the geographic distance between the place from where the request is made to the place where the web server is hosted.

Increase the Load by changing the Threads (users) values

In order to make our load test more realistic, let’s change the Threads (Users) field to 300.
Clear the previous JMeter results by pressing Cmd/Control + E or by clicking the Clear icon in JMeter’s toolbar.

Start the test, and check the results again. As you can see, the Sample Time increased almost by 50% to 178 ms, however no errors occurred while running our load test with JMeter.

Also, while running the tests, server side monitoring will be helpful, looking at metrics like CPU or Memory. In Windows you can monitor these stats by opening the PerfMon tool or in Linux by typing the top command in terminal.

You can extend the load test up to 1000 threads (users), to check how your system behaves and discover potential bottlenecks, memory leaks, performance issues. LoadFocus.com is a cloud load testing service and you can run load tests with thousands of threads (users).

JMeter is a useful load testing tool, which helps you find load testing issues, discover bottlenecks and increate performance of your web application. Feel free to experiment different values for the load test in order to understand how your web server behaves under heavy load. In order to add more plugins to your default JMeter installation, you can check the JMeter plugins add-ons or check here how to add JMeter plugins to JMeter.

In order to run load tests with thousands of threads (users) and to run load tests from different world locations, you can use LoadFocus.com which offers a cloud load testing service, easy to use, which keeps all your tests and test runs in the history automatically.

how to use apache jmeter jmeter load test